Why do people move to Germany? 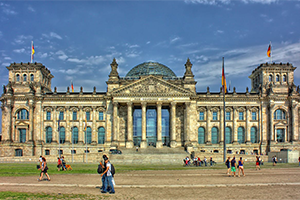 Why do people move to Germany?

Today more than 9 millions foreigners live in Germany. This country is the second most popular destination in the world, after the United States. Every year thousands of migrants come to Germany for a better life. People with different nationalities, religions, educations, professions made Germany the cultural mosaic. Why this country is so popular migration destination?

Germany is well known for its comprehensive welfare system. The principle of the welfare system is enshrined in the law. In this way Germany commits to protect in addition to their freedom, the natural bases of life of its citizens. In case,  a person can not take care of himself, a state will do it. In case, a person can take care by himself but it is not enough to live with dignity, the state will help as well.

Unemployment rate in Germany on 2015 was only 4,7 %. Occupations in demand are doctors, IT specialists and engineers. There are a lot of  jobs thatrequire a degree-level qualification, such as plumber,  electrician, craftsman etc. Vocational experts are in the high demand as well. German- based multinational companies, such as BMW, Siemens, Adidas and Volkswagen, employ thousands of people every year. Recently Germany has succeeded in integrating immigrants ever better in the labour market.

People can be secure about their senility, because pension in Germany is around 1000 Eur per month. It’s  a little higher in West Germany than in East Germany.

Also, any taxpayer living with child can get a child benefit (“Kindergeld”). Parents get it until the children turn 18, though it can continue until they are 25 if they still in school or meet other requirements for an extension. Parents receive a monthly payment of 190 Eur per child for the first two children, 196 Eur for the third child and 221 Eur for every subsequent child.

Germany is attractive destination for youth as well. Graduates, both domestic and international, are able to study Bachelor and Master programs in Germany for free. Meanwhile, private universities are expensive, it can cost up to 20 000 Eur/year. Anyone wanting to study in Germany needs an adequate knowledge of German. International applicants must complete a language test before enrolling. However, if a person can not speak German there are opportunities to study in English with a growing selection of English-language programs for internationalstudents.

Good jobs and salaries, a clean environment, low crime rates, lots of leisure-time and cultural attractions, good public transport – that what makes Germany so attractive for foreigners. People migrate to Germany because of many reasons, but probably the most important ones are strong economic and welfare system.

Fill in required fields and begin tax refund. All information will be sent to your e-mail.

Your registration has been successful!
Thank you for registering.
Now check your email for an account activation email.
Thank you! Check your email. We have sent you all necessary information with document package.

Your opinion means a lot to us

Your reviews help us grow and keep improving the quality of our services.

Fill in required fields and find out the amount of your tax refund.

We would like to inform you that order to improve your browsing experience this site uses cookies. To agree, please click the "Accept" button or continue browsing. You can cancel your consent anytime by changing your Internet browser settings and deleting saved cookies.
Read More